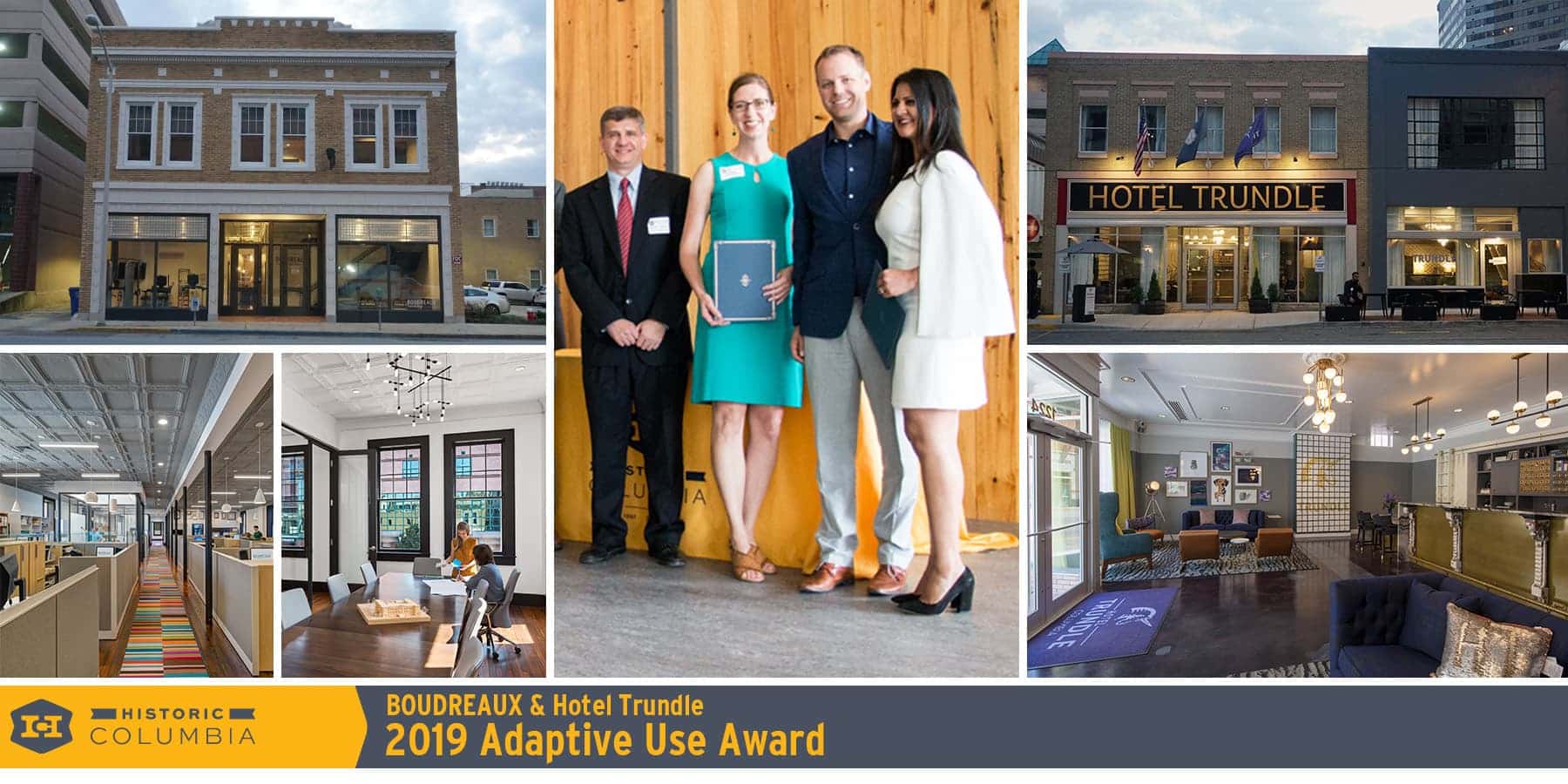 BOUDREAUX’s professional offices and the boutique Hotel Trundle were recognized with an Adaptive Use Award presented by Historic Columbia as part of its Annual Preservation Awards. This project unites three historic historical retail buildings into one: 1519 Sumter Street (built in 1920), 1224 Taylor Street (built in 1940), and 1222 Taylor Street (built in 1914). The project also takes advantage of multiple tax incentive opportunities including abandoned building credits, lost development credits, and state and federal historic tax credits.

Developed as a single project, the three buildings located at the corner of Sumter and Taylor streets—Powell Furniture, Western Auto, and Rose-Talbert Paints—now comprise Hotel Trundle and the offices of BOUDREAUX. The hotel encompasses both floors of Western Auto and Rose-Talbert Paints on Taylor Street as well as the first floor of the Powell Furniture Building. BOUDREAUX—an architecture, planning, preservation and interior design firm—occupies the second floor of this building. The project is an excellent example of adaptive use, transforming three abandoned buildings into vibrant pieces of Columbia’s downtown while retaining original features and restoring missing elements. The project has helped expand Main Street to intersecting streets like Taylor and even to Sumter Street, enhancing downtown’s footprint and vitality.

Built in 1920, the Powell Furniture building was originally home to the Home Light & Power Company. Described as “handsome” with a fireproof basement, freight elevator, show room with red tiles, second floor lavatory and steel ceiling, the company operated at this address until 1923. Between 1923 and 1960, numerous tenants occupied this storefront until Warren Powell purchased the building for his furniture store. Powell
added the signature painted “Powell Furniture” sign on the north elevation but otherwise retained much of the original 1920s appearance. It was not until the 1980s when the glass storefront was enclosed along the top to accommodate the “Powell Furniture Company” sign across it, removing a prismatic glass transom, and the recessed central bay was drawn out. To restore the building to its original appearance, the design team restored the prism glass transom across the facade, one-over-one vinyl windows were replaced with period appropriate six-over-one wood windows, and the grey paint was gently removed to expose the original blonde brick. The pressed tin ceilings on both the first and second floors of the interior were restored, and where missing, replicated to match the existing ceilings. The noted red tiles of the show room are still extant at the building’s first floor lobby, and the new tenant, BOUDREAUX, has mimicked the painted sign on the building’s north elevation.

The two-story brick building at 1222 Taylor Street was constructed in 1914 and first served as the office of Wood Plumbing Company. After being the home of many businesses between 1917 and 1936, Rose-Talbert Paints, who redesigned it in the Modern style in 1936, occupied the space. This renovation gave the building a stucco facade, asymmetrical storefront, and the large Modern-tripartite window on the second floor. An aluminum slipcover facade was added in the 1980s and removed in early 2016 to reveal Rose-Talbert’s original stucco appearance. The building retained much of the 1936 redesign, including ghosting of the original “Rose-Talbert” signage letters, though with some mild deterioration and a later addition storefront design. The rehabilitation restored the asymmetrical storefront and repaired missing stucco and tripartite window. A rear addition on the second floor created additional rooms for the new hotel tenant.

1224 Taylor Street was designed by Wessinger and Johnson in 1940. It features a blonde brick facade with pink cast terrazzo trim at the building cornice, storefront cornice, sills, and lintels. For the next 45 years, it housed Western Auto until Bethel African Methodist Episcopal Church bought the property as a downtown annex for youth group and Bible study classrooms, a faith store, and counseling service for the needy. An aluminum slipcover was added in the 1980s and when removed, revealed a remarkably intact 1940s facade, including the pink terrazzo elements. The original “Western Auto” baked enamel sign with red trim remained in its original location, and the building’s new use utilized this feature, wrapping it in vinyl for Hotel Trundle’s new sign. A restored storefront, including replicated fluted aluminum trim, provided the most dramatic change on the exterior. Original windows were retained throughout, and new openings matched the historic as closely as possible. The interior retained its plaster walls on the first floor while the second, which was used as a stock room, maintained its original brick walls and exposed metal decking for the ceiling.

The successful rehabilitation unites three historic properties within the City’s central business district and contributes to the revitalization of downtown Columbia as its commercial footprint expands beyond Main Street.

Design services for both projects were provided by BOUDREAUX. Mashburn Construction served as the contractor. POND Interiors collaborated with BOUDREAUX on the interior design of Hotel Trundle.